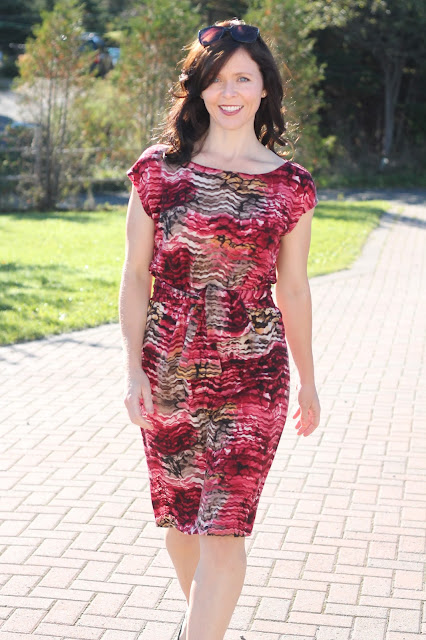 I have said it many times...I'm not a fan of sewing knits...especially the slippery, slinky wants to run away from you kind. But my past, more optimistic, "It's a New Year, let's throw caution to the wind and make all the promises" self thought it would be a good idea to write a reflective post and in that same post include some sewing goals for the upcoming year. Among those goals was one to sew more knits. Did anyone else make these kinds of promises? Are you keeping them? If you wrote a similar post too, go have a look at what you wrote...or don't...I wish I hadn't. I am way behind on that list...way behind.

Back to knits...wearing them is AWESOME. So comfy. Some genius coined the phrase..."secret pajamas"...and it is so true! I have sewn with a stable knit ponte and thought it was time to try another knit, the sweater knit. It wasn't as bad as I thought but it probably helped that I choose a very simple pattern, V8278.

This pattern is now out of print but I'm sure that there are others available like it. I cut out both front and back on the fold, eliminating the CB seam. This left four seams to be sewn and the hemming, which was made simple with my coverstitch. Easy peasy. 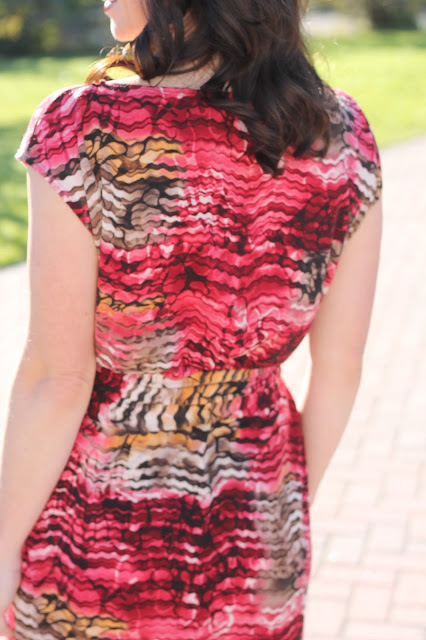 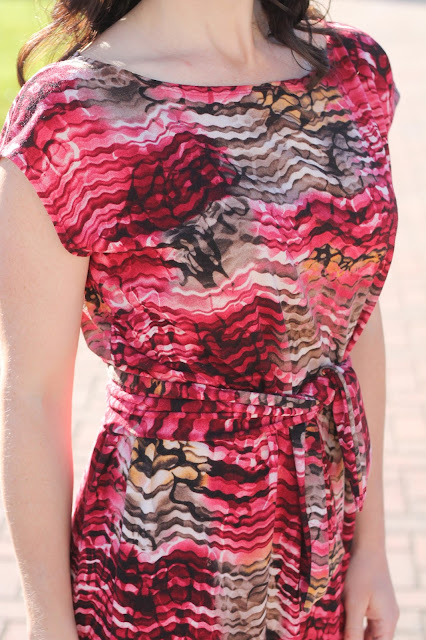 With barely a meter of this fabric, I wasn't left with much to make the tie but worked it out. I may have stretched out the neckline as I hemmed it but it is still fine. Any tips to avoid stretching it? 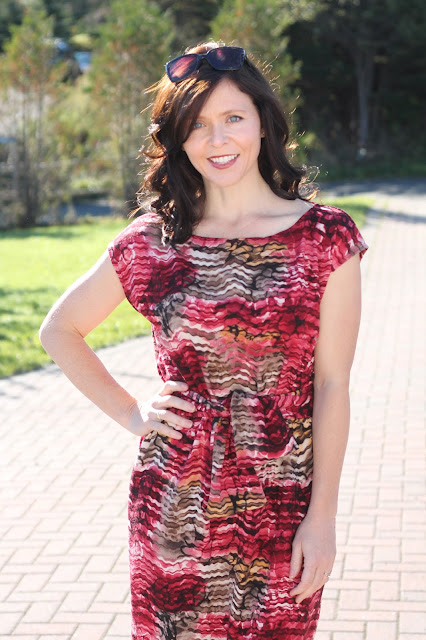 I think this dress is perfect for fall, especially when the days are still warm. I don't feel as though I am dressed for summer but I'm not sweltering in the heat either. It can be tough during the fall to balance seasonally appropriate with weather appropriate.
To say that I love how this dress turned out is an understatement....I think it looks great, it feels nice on and it wasn't a big deal to make... so what took me so long???

Can we talk about this print for a moment? It has a kind of chevron stripe to it, with a hint of a floral in some areas. I love it...but it is very hard to describe...does anyone have a name for it?

Hi! I'm Margo and welcome to my blog! I love clothes and I love to sew...sounds like a match made in heaven...right? Well not everything that comes out of my sewing room is all I dreamed it to be... so this is where I document my projects as I strive to perfect my skills....in both sewing and design.... creating in the gap of where I am now and where I want to be.
You can read more about this in my first post.
You can contact me at prettygirlbymargo(at)gmail(dot)com
Join the LinkConnector Network 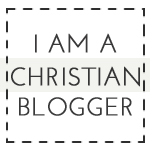